Skip to the content
Forums
The Great Work Comm...
Main Forum - Correc...
I’ve said it before...

I’ve said it before and I’ll say it again...

If people are using Corticopuncture successfully with MSE to make the central suture behave like young bone for transverse expansion, why oh why can’t it be used on the pre-maxillary suture or the transverse suture and combined with bone based distraction or bone based face mask for forward expansion? Like pulling two Velcro strips apart at once would be easier if the middle of it wasn't attached.

As for the other sutures in the mouth - It's possible. But the deeper you go into the mouth, the more surrounding structures you could potentially damage. And the there are a lot more circumaxillary sutures that would have to be weakened to cause a forward effect.

So a lot more holes in areas which are a lot more sensitive to damage, as well as sutures that are not really accessible through the mouth except through surgery.

Rather than breaking the suture, I believe that naturally re-activating these growth sites is the only solution that would produce optimal results. Even with 1CM of mid-palate expansion using MSE and puncturing, the rest of the skull barely shifts because the surrounding sutures are not pliable. Hence why 1CM of expansion accomplishes almost no increase in face width.

the ‘young bone’ quote was from a dentist...

i like your analogy of the Velcro... my understanding was that there was also an effect of the wounding of the bone stimulating the body to heal by laying down new bone more quickly?

You make a good point about the suture in the back of the mouth having some risks involved and possibly even if the suture was loosened any expansion might be curtailed by the other, non-loosened cranial bones and sutures...

But surely the premaxillary suture wouldn’t have that problem? If that was loosened and expanded couldn’t that create a localized forward expansion similar to AGGA except without any teeth tipping/movement?

Of course things that are ‘surgical’ contain some risk... but  I think myself and many others would be happy for a surgical solution so long as it was one that resembled something you’d experience normally in a dentist chair rather than going under general anesthetic and detaching your jaw!

I’m also interested in what you’re referring to when you mention ‘naturally reactivating the growth sites’?

I disagree that expansion through mid palatal suture split gains affects the skull any less than slow remodeling type expansion.

You can clearly see the whole midface of this individual expand. There could be discrepancies between individuals possibly due to how and where the expansion is occurring. If expansion occurs mainly in the front alveolar region, the midface changes will be minimal. Here's my theory, the palatal suture requires less stress/force to expand/split the further forwards it is, in other words the palate towards the front teeth requires less stress to split and expand than the back towards the molars, I suspect this is because to truly expand towards the back it requires expansion of the whole midface, therefore the stress/forces requires are greater. 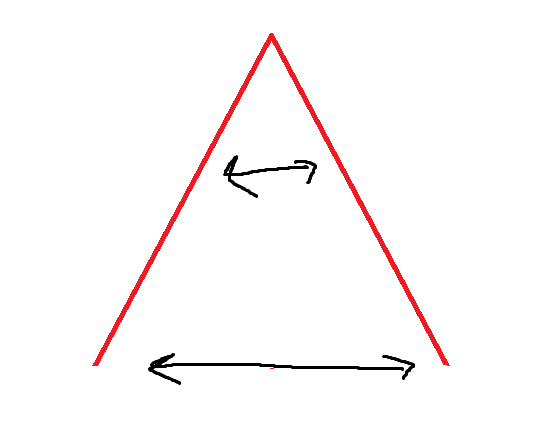 This is sort of what I mean, imagine the bottom is where the front teeth are and towards the back are the molars, this type of expansion explains why people can get big diastemas while seemingly having no change in the midface. I doubt that it's possible to just expand the palate, even if it's through a split, without expanding the midface as these structures are connected and you cannot affect one without affecting the other.

it's a fair point. I'm not sure there's enough volume in the premaxillary structure to have much of an overall impact. You'll end up with a small front section sticking out, then a 'step' in the arch (on a horizontal plane) to the incisor. Better to do a Lefort I and move the whole shebang. Also what of the bite with the lowers after premax comes forward?

Well I guess I suggested the premaxilla because it’s my understanding that some people think that is the main area being worked on by things like Agga, and it seems like an easy way to try this theory out on something other than the midpalatal suture and something that needs to pulled forward. But I suppose that in an ideal world I would hope that such a technique could be done around the sutures of the Maxilla, to really loosen them and make a face mask treatment actually capable of large gains. With cortico or piezopuncture the midpalatal suture can fairly easily open 10 millimeters. Imagine if we could get even half that from our whole Maxilla moving forward!

I just really wish and believe that there could a treatment that was less invasive than Osteotomy and maybe even done in your dentists chair rather than an operating theater, but that had less debatable results than most of the things we’re discussing on this forum.

We’ve seen this with transverse expansion: at first doctors were like no no no only Sarpe expands adult palates and then there were the palate expansion people saying no we can do this with acrylic plates but it was still relatively minimal movement and everyone argued over whether it was mostly tooth movement.

But then through bone borne expansion devices and corticopuncture we have undeniable evidence in both bodies and X-rays that adult palatal sutures can open and move.

Obviously it’s much, much more complex to reach the other maxillary sutures and to then determine the appropriate amount and direction of forces that would pull the maxilla forward than it is to split a palate. And it would probably involve at least a few weeks of 24/7 face mask... (which would still be an improvement on the recovery time/discomfort for a Lefort 2/3 imo)

But imagine if significant, undeniable forward growth of the whole Maxilla could be achieved without full bone cuts and titanium plates, and in months, not years!

Seems worth exploring to me... maybe everyone could mention it to their MSE doctor and see what happens??  😂